Our resident foodie, Laila Yafi, is back this week with another gem for vegans in Bahrain! This time she's hitting up 338's swankiest restaurant, Meisei, where Chef Michael puts a vegan spin on his already fantastic culinary creations. Promising a true ' vegan awakening,' Chef Michael sets expectations pretty high, but if anyone can reach that bar, it's this guy. Read on to find out what went down! 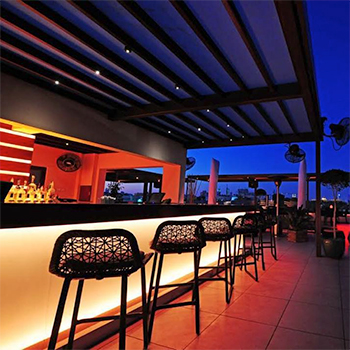 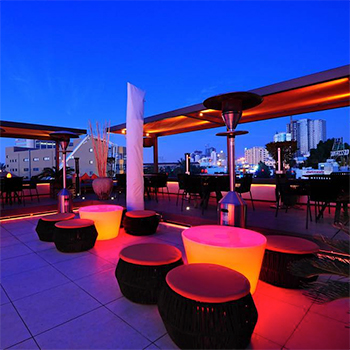 It all started with a conversation about being vegan in Bahrain. I have known Chef Michael for many years before I turned into a fulltime plant-eating enthusiast and my taste buds are no stranger to his momentous dishes, you the know, the ones that prevent you from ever ordering anything different off the menu whenever you go back to the restaurant. I confided in him that although veganism is quickly making a debut in Bahrain, there are only a select few restaurants that cater to the strict pallet of a vegan, while also providing us with a tantalizing refined experience equal to that of a fillet mignon.

Turning vegetables into art and restricting one’s self from using any form of animal byproduct is no easy task. Those who study the fine art of culinary genius are usually used to working with many tools that are rendered from animal proteins. Veganism does not only create hurdles for chefs who must cunningly provide plant based substitutes for every meal to duplicate textures and flavours, but the issue of cross-contamination is equally formidable.This is especially true when a popular restaurant like Meisei can accommodate famished patrons excitedly awaiting their culinary delight on their 3 tier dining floors. 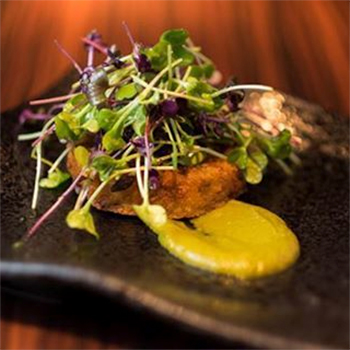 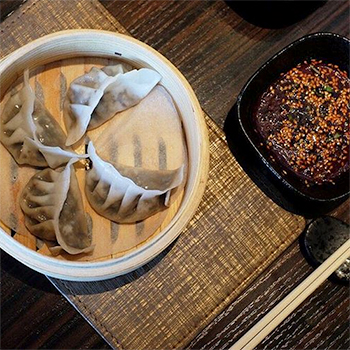 To my delight, Chef Michael stated that Meisei does not have an issue of cross contamination. In fact he stressed that the restaurant always ensures to uphold this promise, showing true dedication and understanding for patrons who avoida certain type of food due to life style choices or allergies. And so, I was graciously invited to dine at the Meisei, where Chef promised a true vegan awakening.

That night, accompanied by my father, sister and close friend, we entered a world bathed in a radiant warm glow of red and gold. It was a welcoming oasis of tranquility designed to soothe your worries of the outside world of things such as deadlines at workand the general irksome stresses of life. Upon entering this haven of earthly elegance, I looked around to swallow the sites around me and was immediately struck by the harmonious opennessof the restaurant. It would seem that Chef Michael’s respect for transparency translated exquisitely to the decor and design of the restaurant. One of my favorites and most memorable parts of the establishment is the theatre kitchen, which allows the diner to watch the culinary skills and finesse of the chefs masterfully hard at work to createthe edible art that is placed up the canvas of each patron’s plate. 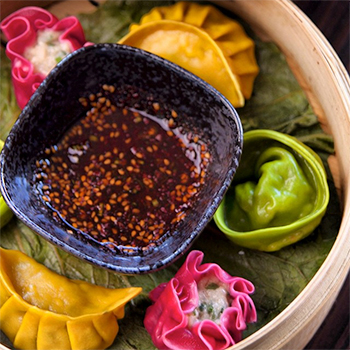 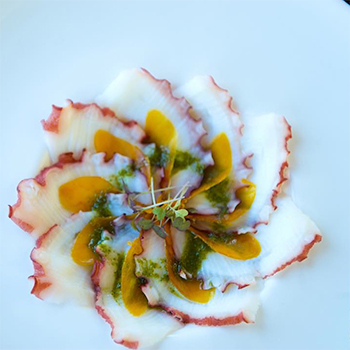 We were led to our table and shortly after, Chef honored us with a visit and recommended some of Meisei’s culinary delights. As I glanced through the menu, I found that there was a plethora of meals I could choose from just as Chef had promised. For once I found myself having to go back and forth between which dish I wanted. Finally, after much deliberation, we made our choices and kindly requested our meals. Our first course was a wonderful selection of fresh salads, vegan dim sum and spring rolls. We all graciously shared the dishes and were all taken away by the complex flavors and presentation upon dark grey granite platters. The vegan dim sum I ordered was one that came highly recommended by Chef Michael and arrived in a steamer basket containing a modern twist of dim sum of steamed dumplings that delicately held within their folds, rice flour pouch incased with wild Asian mushrooms accompanied by soy sesame vinaigrette.

While I may be a vegan I still appreciate the éclat and skill of dishes that include animal protein. For his main course, my father ordered the crispy aromatic duck, another famed dish on the Meisei menu. It announced its arrival to our table first by its mouth-watering aroma. As the waitress set the duck down before us, which was accompanied by spring onion, cucumber, pancakes and a sweet balsamic teriyaki sauce & Meisei plum jam, we all gazed upon this golden delicacy in coveted wonderment. The waitress politely asked if she could then shred the Peking duck, and with my father eager consent, began to do so. More wonderful rich smells swirled into the air like a dancer of smoke and flavors as the meat came off the bone without protest. You could tell just by the way it shredded that it was cooked to perfection. Once the golden-brown duck meat was theatrically prepared, my father made his first pancake duck piece of heaven and we all followed suit with our own meals, finding ourselves once again in an altered state of deliciousness. 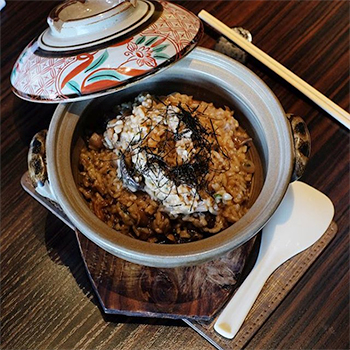 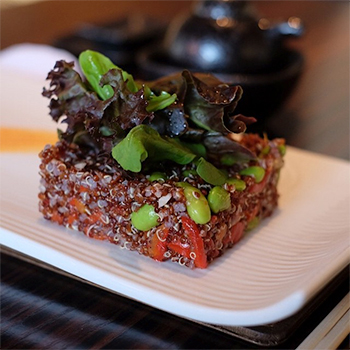 No prisoners were taken, we finished every crumb and serving of sauce brought to us. Bellies full and warmed by our meals, we ordered green tea to finish. To our surprise, our teas were joined by a parade of sweet temptations that Chef Michael sent for our enjoyment. The desserts consisted of goat cheesecake and uniquely constructed geometric, red velvet cake, and I felt a sudden twinge of jealousy as those around me cut into the desserts, praising every delightful bite.

Suddenly, the end of the parade made its way towards me as a dark chocolate cherry bomb arrived and with it, the wonderful news that it was vegan! I picked up my fork and cut into the rich splendor of chocolate mousse and cherry compote.

Meisei translated in Japanese connotation Honor/Elegance/Integrity which can be translated to Fame. The symbol is the highly esteemed sakura flower, also known as the cherry blossom, which for hundreds of years has come to exemplify many different powerful meanings across Asia. It is said that the sakura flower signifies the message of being present and embodies the magnificence and life’s fleeting beauty of ephemerality. This belief is at the core of Meisei’s philosophy, one that upholds and values being aware and honoring the moment. The dishes that are served at this temple of taste are flavored with this lesson of ‘now’. As the sakura flowers bloom en masse across the mountains of Japan, reminding its admirers of the fragility and splendor of life, so too does each dish at Meisei blossom, captivating each patron and drawing them into the present where we so frequently dwell.

No matter what kind of day you've had, when work is done it's time to unwind and settle into your favourite haunt. You've worked hard and now it's time to play too. There

Brunch in Bahrain is a biggie, there's no question about it. Fridays are usually marked on most peoples' calendars for some serious indulgence at one of Bahrain's many brunch experiences, and it really