While Dubai may have to wait a little bit longer before Michelin begins rating the city's finest eateries, there are plenty of restaurants that already have Michelin-starred dining in their DNA. From world-class venues run by celebrity chefs such as Yannick Alléno and Vineet Bhatia, to newer, up-and-coming eateries such as Enigma that host four Michelin-starred chefs every 12 months, Dubai is definitely the place to treat yourself to award-winning food. 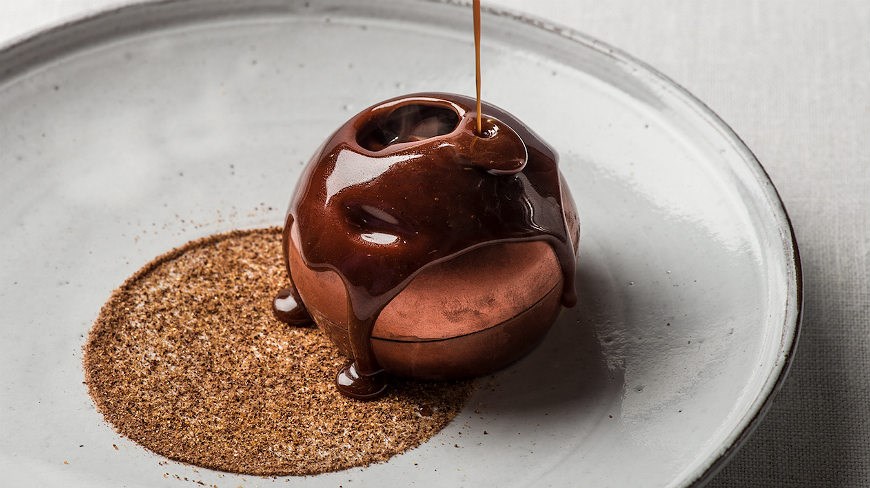 Enigma
Avant garde and captivating is the best way to describe this latest edition to Dubai’s culinary scene. Located at the Palazzo Versace Hotel, Enigma is a new and exciting dining concept which involves a constant rotation of the world’s top chef’s and their signature dishes. Four times a year diners can expect an entirely new menu from a guest Master Chef from anywhere in the world.

First up was the intriguing Quique Dacosta, hailing from Spain and bringing an unprecedented level of creative molecular gastronomy to the UAE. The second act of 2016 sees 2 Michelin-starred chef Björn Frantzén take the helm with his very special take on Nordic cuisine, combining innovation and traditional preservation methods in a modern interpretation of Scandinavian culinary history. Ranked 31 in the World's 50 Best Restaurants, Björn definitely knows his gastronomy! His Enigma concept, titled 'Journey of a Nordic Chef,' brings authentic Nordic ingredients and tastes to the Middle East for the first time. The interactive experience will reflect the changing seasons of Northern Europe, and the meal is divided into a 'Prologue' and subsequent 'Chapters.' Excited? We definitely are! Seats are limited, so advance bookings are highly recommend. You can pre-book your seats in advance through eat.

Book your table at Enigma 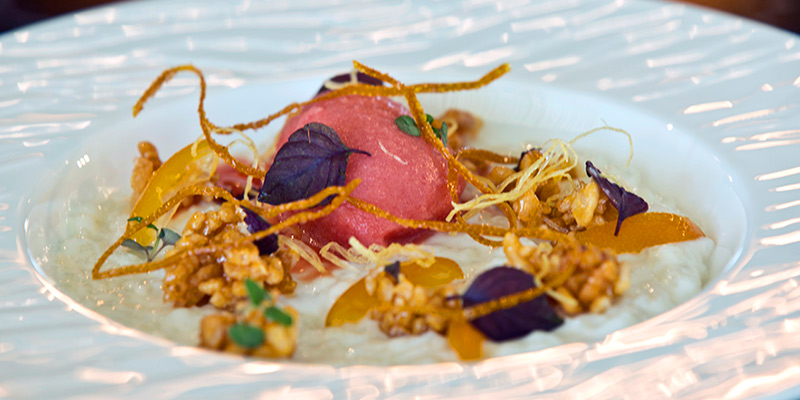 Junoon
When it comes to top-level Indian fine-dining, we head straight to Michelin-starred restaurateur Rajesh Bhardwaj's Junoon. Initially gaining fame through its New York branch, based in Manhattan, it quickly received a Michelin star for its sublime dining experience, which has been exported in its entirety to its Emirate's restaurant. The Dubai venue itself is small and charming, with an open kitchen and a bar complimenting the main dining area. The décor consists of chocolate, brown and bronze colors, which are complimented by a golden mural on one wall depicting the Indian Tree of Life. There’s some great spots for a romantic meal tucked away behind some intricately carved wooden frames, reminiscent of an old ancient temple.

The menu is refreshingly short, and has a range of dishes you’ve probably never come across before. Representing fusion cuisine at its very finest, the choices include a foie gras terrine with smoked peanut chutney and an Atlantic mackerel cooked in banana leaf. The new-age dishes are balanced nicely with more classical options, such as the eggplant chaat, shrimp malai and murgh mirza hasnu. Our recommendation is to make full use of the staff’s extensive knowledge on the menu, who are excellent at explaining what dishes consist of what which choices go well together.

Book your table at Junoon

La Luz
This is potentially one of the most exciting restaurants to hit the Dubai fine-dining scene in 2016! A Spanish export, this place presents an exciting mixture of Mediterranean and Catalonian cuisine created by an all-star culinary cast. Having met with a huge amount of success in Madrid, Barcelona and Girona, La Luz is now serving its unique food offering in the Emirates. At the helm is Executive Chef Alain Devahive, who has over ten years experience at three Michelin-starred restaurant elBulli, voted the best restaurant in the world on a number of occasions, as well as a long stint at their food laboratory where the edges of culinary art are pushed to the very extreme. A Barcelona native, he’s also worked at a number of other Michelin-starred eateries across Spain and France; expect great things from this man!

The venue itself has distinct lounge, bar and dining spaces, and an open aired terrace for when the weather is nice. The staff are almost all Spanish speakers, add an authentic touch to this stellar dining experience. We love the view of the open kitchen, where the culinary team are collected and cool as they churn out the gastronomic dishes one after another!

Book your table at Laluz 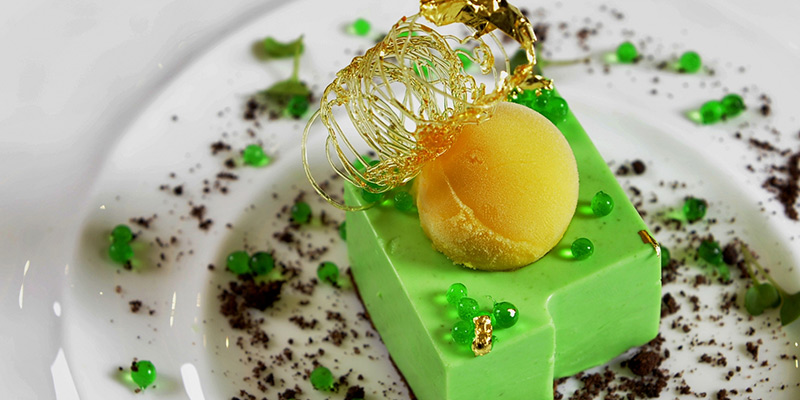 Indego by Vineet
Dubai's foodies have been lining up out the door of this swanky joint ever since it opened, and rightly so; the sublime menu is peppered with delicious contemporary takes on classical Indian dishes, all served in a venue that sits between intimate and upmarket. Spearheaded by Michelin starred Chef Vineet Bhatia, this eatery is a fusion of authentic Indian regional specialties with a new contemporary accent. Chef Bhatia has included his own personal take on Indian classics, popular street food given a gastronomic twist and some seriously cutting edge contemporary options. 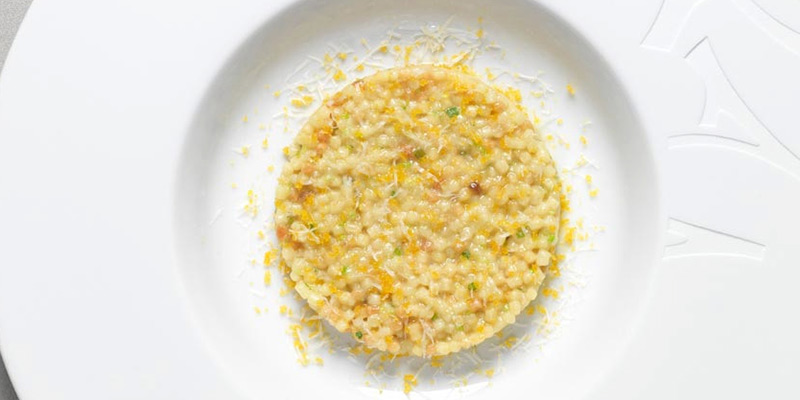 STAY by Yannick Alléno
Yannick Alléno is one of the big hitters on Dubai's masterchef scene, with three Michelin stars to his name and three eateries at the One&Only The Palm. A renowned culinary genius when it comes to French cuisine, he's is potentially one of the most exciting chefs to set up shop in the Emirates in recent times. The menu at STAY is grounded in authentic French cooking, but is combined with contemporary interpretations that make many of its dishes very unique. The venue itself is as suave as the food; high timber walls, white pillars and black chandeliers hanging from a vaulted ceiling make for quite the atmosphere.

Dinner really is a complete sensory experience here; many of the dishes have an element of table-side assembly that lets you watch the creation of these masterpieces. The food offering is just all-round culinary excellence, ranging from seafood ravioli to melt-in-your-mouth wagyu beef. If you have some space left for dessert then head on over to the patisserie area, known as the dessert Library, where the pastry chefs will whip you up some sweet magical thing.

Check out our blog post on Ramadan in Bahrain 2018 to see an updated list of Iftars and Ramadan tents. [https://blog.eatapp.co/ramadan-tent-bahrain-2017/] From lavish iftar buffets to delicious suhoors, live

Check out our blog post on Ramadan in Bahrain 2018 to see an updated list of Iftars and Ramadan tents. [https://blog.eatapp.co/ramadan-tent-bahrain-2017/] Ramadan. A time for reflection and renewal, with