Bahrain is home to a diverse selection of restaurants, and among them are an abundance of Romantic evening getaways. Whether you're looking to launch a new romance or enjoy a special moment with a loved one, dining out at one of Bahrain's finer eateries is bound to be a part of the proceedings. Luckily we've done the hard work for you; from romantic Arabian chateaux to trendy sky-high Japanese eateries, we've put together the best spots to tantalize your partner's taste buds come date night.

La Fontaine
This restaurant is potentially the most romantic spot on the whole island, as well as one of the most picturesque! Hidden away in one of the older parts of the Manama souk, La Fontaine is a beautifully restored 150 year-old historic building that melds antique Bahraini architecture and French design. It boasts one of the only wind tower structures in Bahrain, and combines that with a complete chateaux with inner courtyard, airy passageways and a burst of bougainvillea and palm fronds to give the whole setting a rustic touch. Fantastic contemporary European cuisine is served by candlelight, while the modern art and traditional architecture really makes this place a not-so-little oasis of tranquility in the hustle and bustle of Bahrain. This is definitely the place to blow your date's socks off, with regular live piano performances and cultural events to add a bit of flair along with a gastronomic dinner!

Book your table at La Fontaine

La Mer
Serving dinner out on a jetty, La Mer sits right on the ocean with the gentle waves of the Arabian Gulf lapping up against the shore. Located at the Sofitel Bahrain Zallaq Thalassa Sea & Spa, this award-winning restaurant is renowned for its sublime seafood, while the panoramic views of the sea makes sure it gets full points for romance! The seafood is as fresh as you can get it, and the culinary squad do a fantastic job of preparing and cooking it up however your palate desires. The service is also perfect, with attentive staff making sure everything ticks along exactly as it should. For an extra quick ride up to cloud nine order one of their delicious desserts, and you and your date will be in foodie heaven in no time at all!

Book your table at La Mer 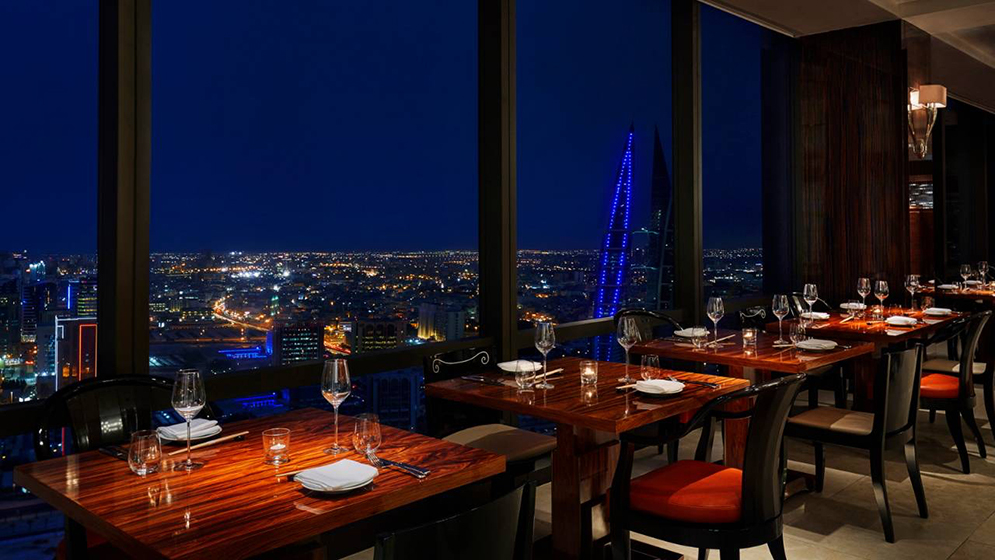 re Asian Cuisine
Michelin-starred celebrity chef and restaurateur Wolfgang Puck is the mastermind behind RE Asian's amazing culinary experience, and it shows! The 50th floor view of the Bahrain skyline seen out of floor-to-ceiling windows makes for another one of Bahrain's most romantic views, while the edgy decor and exceptional cuisine makes this a ten out of ten dining spot. Having just clinched Time Out Bahrain's Restaurant of the Year Award, this joint has bolted to the top of the island's foodie list, and rightly so. Combining art-deco elegance with a flavor-packed menu featuring some pretty intricate fusion combinations, the RE Asian experience is a definite contender for our most romantic places to dine list! Not sure what to pick? Try out their pan seared wagyu beef pot stickers or miso-honey marinated black cod for what may be the best dish you've sampled. Ever.

Book your table at re Asian

Masso by Chef Susy Massetti
Led by the experienced hand of Chef Susy Massetti, Masso has clinched a steady stream of culinary accolades ever since it opened its doors at the Palace Boutique Hotel. It artfully serves a combination of contemporary Southern European cuisine and Middle Eastern influenced dishes with a unique twist, and the ever-changing menu reflects the seasons, with local and organic produce featuring as the foundation of many of Chef Susy’s masterpieces. The atmosphere is inviting and unpretentious, and the candle-lit interior is the perfect spot for a romantic meal! The eatery’s light, airy and elegant setting have become a cornerstone to the Bahrain fine dining scene, having won awards in Time Out Bahrain, Esquire Middle East and FACT Magazine. And it's easy to see why the restaurant has consecutively been awarded best restaurant in Bahrain - the atmosphere is sophisticated, the service is attentive and the food five stars.

Book your table at Masso

La Pergola
Known with local foodies as the grand-dame of Italian cuisine, La Pergola’s authentic Italian style has been pleasing diners for over thirty years and is one of the main reasons the Gulf Hotel is recognized as such a bastion of gastronomy in Bahrain. Boasting a menu many consider to be the most delizioso Italian offering on the island thanks to its emphasis rustic regional favorites and classical dishes made to perfection. The ever-changing menu offers authentic Italian food, featuring a range of traditional choices from all over Italy as well as more contemporary versions of classical dishes. Whether you choose a regional dish or one of Chef Enrico Morselli's personal creations, it's going to be delicious. On our last visit we sampled Enrico's sautéed veal escallops in a thyme sauce and were blown away! The interior oozes with old-world charm; classic style murals, elegantly vaulted ceilings, Venetian blinds and cast-iron statues create a decidedly Roman atmosphere without being overpowering.

Book your table at La Pergola

Ventus Lounge
The world's very first floating lounge has opened up right here in Bahrain, and it turns out it's a perfect choice for date night! Ventus Lounge, at the Four Seasons Bahrain Bay, let's you indulge in some pretty gastronomical cuisine while floating on your very own detachable lounge boat, inclusive of a private butler and complimentary cocktails - not a bad way to spend Friday night!

Imari
While the decor at Imari is as far away from traditional Japanese as you can get with its blue and white maritime theme, this 35th floor establishment gives a nice view of the Bahrain skyline while giving off a cool, cosmopolitan and funky vibe. Most of the food is served Izakaya-style, also known as Japanese tapas, and it's perfect for one of those extended dinners with lots of good times and great friends. Throw in some fresh robatayaki, sushi and sashimi and we're in far eastern heaven.

Book your table at Imari

You can now grab a 15% discount on your food bill at both Keizo and Saffron, located at Al Areen Palace & Spa, whenever you make a reservation through eat! Time to get out

Maybe it's pride, or maybe you're as big a spice junkie as us, but there’s a certain pleasure that comes with the pain of housing a plate of extremely spicy chow. We