Our favorite restaurants are finally re-opening just in time for Eid after a long month of being absent from Bahrain's fine-dining scene! Get ready for some serious culinary indulgence with the return of CUT by Wolfgang Puck, My Cafe, La Vinoteca Barcelona, Mirai and Masso by Susy Massetti. Excited yet? Grab your friends, make a quick booking on eat and head on down to one of these places for some of the best chow to be had on the island this Eid!

CUT by Wolfgang Puck, Four Seasons Bahrain Bay
Bahrain's number one steakhouse is back with a bang after closing for the month of Ramadan! They're offering up a meticulously crafted three course set menu created by chef extraordinaire Ben Small. The meal will kick off with an enticing butter lettuce salad with Roquefort blue cheese, avocado and herb vinaigrette, followed by CUT's most popular dish and Chef Small's personal recommendation; the USDA certified black angus petit filet mignon with wasabi-yuzu kosho butter. The icing on the cake of this perfect meal is the dessert; a white coffee ice-cream banana cream pie. CUT's Eid three course set menu is priced at BD29++ per person.

Book your table at CUT by Wolfgang Puck

Mirai, Block 338
As far as most the popular restaurants go, Mirai has been a contender for the culinary number one spot for a number of years now, and they were sorely missed over Ramadan. But fear not, as they will be open for Eid! This small eatery in Adliya has won the hearts of many a diner on the island thanks to its combination of a a Nobu-esque atmosphere, new wave Japanese contemporary cuisine and stylish regulars. We're looking forward to indulging in their menu once again, with its mouthwatering fusion dishes that mix up authentic Japanese cuisine with international fusion twists, served in a signature style that is pretty much edible art.

La Vinoteca Barcelona, Adliya
Oh how we've missed Chef Joan Gomez's Patatas Bravas and Gambas al Ajillo! Our favorite Catalonian eatery is finally opening their doors again after a long month sans our favorite Spanish foods. They have some new sublime Mediterranean dishes, contemporary Spanish delicacies and Catalonian specialities up for grabs, so head on down here for Eid to make it a tasty one. And incase you need a reminder of what the menu is like, think authentic tapas dishes, a great range of paella, traditional gazpacho, fish of the day options and some of the best desserts in Bahrain. If you’re a fan of Tapas, the Flamenco and Torres wine, La Vinoteca is a must!

Book your table at La Vinoteca 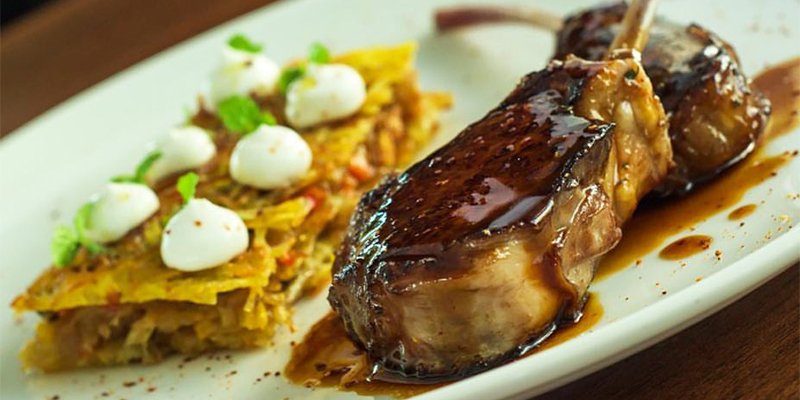 My Cafe, Block 338
Bon vivant is back! We've missed My Cafe's boutique eating concept in the trendy 338 area, complete with comfortable seating, bookshelves stacked full of intriguing reads and a seriously good seasonal menu. If you haven't checked this place out yet then you've been seriously missing out! A small selection of uniquely crafted dishes, combining with some lighter classics and other more indulgent choices as well as a variety of freshly made desserts will have you in culinary heaven in no time at all. With choices such as duck foie gras, veal cheeks and Japanese-style panko breaded popcorn shrimp, this place is more than tastebud friendly. If you love good food and a great setting with a seasoning of culture, then My Café should be at the top of your to-visit list this Eid.

Book your table at My Cafe

Masso by Susy Massetti, Adliya
What is largely acknowledged as Bahrain's best contemporary Italian restaurant is also near the top of our list for Eid! Chef Susy Massetti serves some of the island's most acclaimed seasonal and local fare that combines Middle Eastern and Mediterranean influences, all in an inviting and unpretentious atmosphere. Seasonal variation and quality of ingredients are king (or should we say queen?) at Masso, with every item going through a rigorous process of refinement before it's deemed fit for the menu. The eatery’s light, airy and elegant setting have become a cornerstone to the Bahrain fine dining scene, having won awards in Time Out Bahrain, Esquire Middle East and FACT Magazine. And it's easy to see why the restaurant has consecutively been awarded best restaurant in Bahrain - the atmosphere is sophisticated, the service is attentive and the food five stars.

Book your table at Masso

Eid Mubarak! And what better way to celebrate over the holiday weekend than with some gourmet Middle Eastern cuisine at one of Dubai's top restaurants? From Lebanese, Syrian and Palestinian, to Emirati, GCC

Did someone say Lomo Saltado? Get in on the serious fine-dining happening for Eid at these Latino joints, serving up some of the best Peruvian, Argentinian and Brazilian cuisine this side of San

—
CUT, Masso, My Cafe, La Vinoteca and Mirai are back with a bang for Eid!
Share this